Stephen Gorove (1917-2001) was a space law education pioneer. He served as a professor of space law and director of space studies and policy, from 1991-1998, at the University of Mississippi. He organized the first North American international space law conference, which was held at the University of Mississippi in 1969. He founded and chaired the editorial advisory board for the first space law journal, the Journal of Space Law, in 1973. He served as the first director of the NASA-sponsored National Center for Remote Sensing, Air and Space Law from 2000 until his passing.

A Guide to the Collection can be found here. 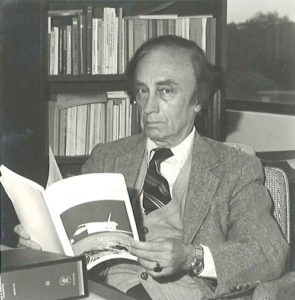 Born in Erendred, Hungary, in 1917, he graduated from the University of Budapest in 1939. After immigrating to the United States, he began his studies at Yale University. He received a master of laws degree and doctorate from that institution in 1950 and 1955 respectively.

Gorove developed the first regular space law course in American legal education and built a core program at the University of Mississippi dealing with all aspects of space exploration. On April 10, 1969, just three months prior to the first human landed on the Moon, he helped organize the first space law conference in North America, titled “Man’s Landing on the Moon – Legal Implications and Perspectives.” The Conference addressed questions including what law is to govern human activity the Moon, whether any nation can exercise sovereignty, jurisdiction or control on the Moon, and whether “John Doe, AT&T or the UN” could acquire land or other valuables on the Moon?

In 1973, he founded the world’s first space law journal, the Journal of Space Law.As an advocate of a central entity to address legal problems in space, Gorove’s scholarship in international and space law became a cornerstone of the NASA-sponsored National Center for Remote Sensing, Air, and Space Law, which opened in the University of Mississippi School of Law in 2000.

He was a prolific lecturer around the world, he also served as a consultant to the Institute of Air and Space Law of McGill University.

In 1958, Gorove addressed the first Space Law Congress at The Hague, and for many years, he represented the American Society of International Law before the United Nations Committee on the Peaceful Uses of Outer Space, and he was an active member of the International Astronautical Federation. In addition, he helped develop international treaties establishing jurisdictional boundaries and liability limits for space exploration and relevant issues, including effectuating regulations on NASA’s liability for property damage caused by falling space debris.

Gorove served the International Institute of Space Law as a vice-president.

A contributor to professional journals within his field, Gorove edited more than twenty books and was the author of Developments in Space Law: Issues and Policies (1991), United States Space Law: National and International Regulation (1982), and The Space Shuttle and the Law (1980).

The Stephen Gorove collection contains 15 linear feet of personal correspondence and professional papers relating to Gorove’s prestigious law career and the establishment of the National Center for Remote Sensing, Air, and Space Law.

A Guide to the Collection can be found here.