Andrew G. Haley made a number of exceptional contributions to the history of modern astronautics. Considered to be the world’s first space law practitioner, Haley helped shape the emerging field of space law as an administrative leader, legal advisor, member, and delegate of the American Rocket Society, International Astronautical Federation, the International Institute of Space Law, and the International Academy of Astronautics. He co-founded and managed a major rocket manufacturing company, and coined the term “metalaw,” which refers to the study and development of a workable system of laws applicable to relations with alien intelligences. In addition, Haley worked tirelessly as a reporter, writer, and lecturer with an aim toward coalescing and defining the emerging national and international aerospace regime and activities. 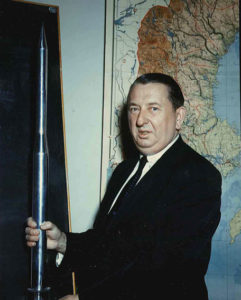 The son of Christopher Joseph and Kathleen Rose (Gallagher) Haley, Andrew Gallagher Haley was born on 19 November 1904 in Tacoma, Washington. He earned bachelor of laws degree from the Georgetown University Law School in 1928 and bachelor’s degree from George Washington University in 1934. He was admitted to the D.C. and Washington State bar associations in 1928 and 1929 respectively, and he was a member of the International, Inter-American, Federal, and Federal Communications Commission bar associations over the course of his career. He was also a member of Delta Theta Phi legal fraternity.

While a student at Georgetown University, Haley worked part-time for Washington Senator C. C. Dill, where he helped draft the Federal Radio Act of 1928. He also served in the US Merchant Marine as a tele-operator while at Georgetown. He made multiple crossings of the Atlantic on the passenger cruise ship SS Leviathan during the summers of 1925 and 1926. He also made Atlantic crossings in 1929. The summer of 1927 he spent cramming for the 1927 District of Columbia Bar Examination, which he passed in December 1927. Haley received an LLB degree from Georgetown in June 1928. In the school year 1928-29, Haley studied International law at a university in England. In 1929, after serving again in the Merchant Marine in April and May, he returned to Washington State.

He was employed as a secretary by Congressman Ashley Horr during 1931 and 1932; and he was an aid to Congressman Wesley Lloyd during 1933. While serving in Congressman Lloyd’s office, in September 1933 he was appointed to an attorney position with the Federal Radio Commission (FCC). In that position he also worked part-time with Senator C. C. Dill’s office, to help draft the Communications Act of 1934. When it was enacted, Haley was appointed to the legal staff of the Federal Communications Commission created by the 1934 Act. In 1939, after 5 years with the FCC, Haley left the civil service and became a private practitioner in Washington, D. C. He began in sole practice but later joined one other attorney in a partnership and subsequently was the senior member of several law firms during the 1950 and 1960s.

In 1942, he was called to active service as a Major in the Judge Advocate General’s Office, Headquarters, Army Air Forces.

An expert in rocket propulsion, Haley was released from the Service to co-found, with Theodore von Karmen, the Aerojet Engineering Corporation (later Aerojet General), which designed and developed rocket and jet-assisted take-off units for aircraft during World War II. Haley served as Aerojet’s second president and managing director until 1945. From 1945-1946, Haley served as an advisor to the United States Senate Special Committee, investigating the National Defense Program.

In addition, he served as president and director of Missiles-Jets & Automation Management Company.

An advocate of astronautical communications, Haley represented the IAF and the ARS at the Eighth Plenary Assembly of the International Radio Consultative Committee (CCIR) of the International Telecommunication Union (ITU) in Warsaw, Poland, from 31 August – September 1956. He attended CCIR sessions in Moscow from May-August 1958, as well as the CCIR meeting in Geneva, Switzerland. In April 1959, Haley served as chairman of the Government-Industry Arrangements Committee for the Ninth Plenary Assembly of the CCIR in Los Angeles, California, and from August-December 1959, he served as a delegate to the Administrative Radio Conferences of the ITU in Geneva.

Appearing before the Federal Communications Commission and the State Department Radio Preparatory Committee as an advocate of the complete astronautical radio allocations plan, Haley obtained full recognition for the IAF for the ITU and the promulgation of far-reaching proposals for non-military and worldwide radio frequency allocations from agencies of the United States government.

In 1956, he helped to establish the field of space law and coined the term “metalaw,” which refers to the study and development of a workable system of laws applicable to relations with alien intelligences.

NATO and the United Nations

From 18-20 February 1957, Haley participated as a member of the Human Factors Panel in the Astronautics Symposium held in San Diego, California, under the sponsorship of the United States Air Force Office of Scientific Research and Convair Division of General Dynamics Corporation.

In 1956, Haley published an article entitled “Space Law and Metalaw—A Synoptic View,” in which he proposed his “interstellar golden rule”: Do unto others as they would have you do unto them. In 1958, Haley published Rocketry and Space Exploration. He developed his ideas in various papers and books, including Space Law and Government (1963).

Haley was honored for his body of work by the American Rocket Society (2 December 1954) and the American Bar Association, and he received the Grotius award from the Grotius-Stiflung in Munich, on 28 August 1958.

The Haley Space Flight Award (Haley Astronautics Award), presented every other year by the American Institute of Aeronautics and Astronautics for outstanding contributions by an astronaut or test personnel to the advancement of the art, science, or technology of astronautics, was first awarded in 1954. He was inducted into the International Space Hall of Fame at the New Mexico Museum of Space History in 1976.

The Andrew G. Haley Collection contains more than 24 linear feet of private and professional correspondence, manuscripts, personal files, photographs, and scrapbooks. The collection includes extensive correspondence with legal scholars, academics, politicians, and military personnel from all over the world. Also included in the collection is material relating to the early years of the International Astronautical Federation, International Institute on Space Law, International Academy of Astronautics, and American Bar Association.